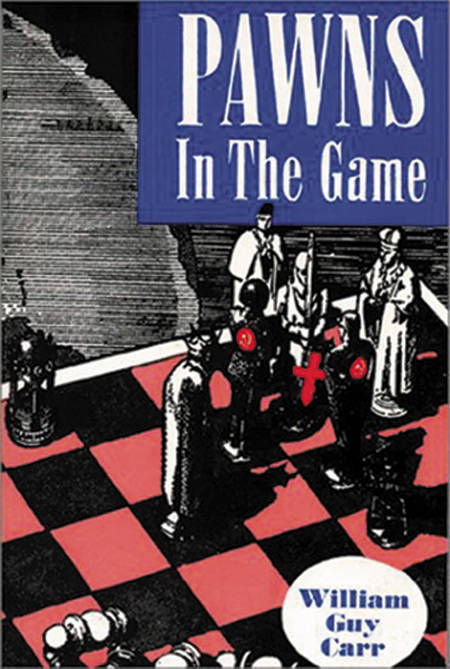 The leaders of the Illuminati have divided the people of the world into two main camps. They used Kings and Queens; Bishops and Knights; and the masses of the world’s population, as pieces in their games. As far as England is concerned, in only four years, 1694 to 1698, the national debt was increased from one to sixteen million pounds sterling. This debt accumulated because of wars.

Karl Marx (1818-1883) was a German of Jewish descent. He was expelled from Germany, and afterwards from France, for his revolutionary activities. He was given asylum in England. In 1848 he published the Communist Manifesto.

Karl Ritter (1779-1859) was a German Professor of History and Geopolitical science. He wrote the anti-thesis to Karl Marx’s Communist Manifesto. He also drew up a plan by which he maintained the Aryan Race could first dominate Europe and then the entire world.

Karl Ritter’s study of History convinced him that a very small group of wealthy, and influential, international Bankers, who gave allegiance to no country but meddled in the affairs of all, had, in 1773 organized Grand Orient Freemasonry for the purpose of using The World Revolutionaly Movement to further their secret ambitions. Their Long Range Plan was for their group to gain ultimate control of the wealth, natural resources, and man-power of the entire world. Their ultimate objective was to form a Totalitarian Dictatorship based on their theories of Atheistic dialectical and historical materialism. Ritter claimed that most of, if not all, the International Bankers were of Jewish descent, regardless of whether or not they practiced the Jewish faith.

The British special branch of intelligence; the Canadian R.C.M.P., and the U.S. F. B.I. could arrest every Communist leaders within twenty four hours of the order being given, but they are not allowed to act. WHY ? The answer is simple. Communism is being Contained' on the national and international levels of government on theADVICE’ of the Illuminati’s agentur who give a great many utterly unconvincing excuses for the present policy of Britain, Canada, and the United States towards national and international Communism. If the F.B.I. or the R.C.M.P. act then the Judges of the Supreme Courts of both countries find reason in law why those arrested should be set free. Such action would be utterly rediculous if Communism wasn’t being contained for use in the final social cataclysm.

Lucifer could hope to win back the souls in dispute would be to inoculate them with the doctrine of Atheistic-Materialism. Undoubtedly many people will ask “But how could the Devil inoculate the minds of men with Atheistic and other evil ideas ?”

That question can be answered in this way, If HUMAN Beings call establish radio and television stations, from which one individual can influence millions of others by broadcasting his opinions on any given subject over the invisible air-waves then why shouldn’t it be possible for CELESTIAL Beings to broadcast their messages to us ?

No brain specialist has dared to deny that in the brain of each individual there is some kind of mysterious receiving set. Every hour of every day Human Beings are saying “I was inspired to do this” or “I was tempted to do that”.

Thoughts, be they good or evil, must originate somewhere, from some “cause”, and be transmitted to the human brain. The body is only the instrument which puts the dominating thought for “Good” or for “Evil” into effect. One fundamental fact which all people, who believe in the existence of God, must never forget is this — If we are on this earth for a period of trial; If we have been given our Free Will, it is to enable us to decide whether we want to go to God or want to go to the Devil.

Therefore, if the Devil did not have the opportunity to influence the minds of men there would be no test. If Almighty God sent his prophets and His son Jesus Christ., to show us clearly what is Good and what is Evil, then why wouldn’t the Devil send his false Christs and his false prophets to try and prove to us that Evil is Good and that Good is Evil ?

The leaders of the Illuminati have divided the people of the world into two main camps. They used Kings and Queens; Bishops and Knights; and the masses of the world’s population, as pieces in their games. The ruthless policy of the leaders is to consider all other human beings as EXPENDABLE, providing the sacrifice of a Major piece, or a million Pawns, places them a move nearer their ultimate totalitarian goal.

The despotism of Satan. Professor Ritter is reported to have said the present phase of this game started in the Counting House of Amschel Mayer Bauer alias Rothschild, located at Frankfort-on-the-Main in Germany, when thirteen Gold and Silversmiths decided they must remove all the Crowned Heads of Europe; destroy all existing governments; and eliminate all organized religions, before they could secure absolute control of the wealth, natural resources, and manpower of the entire world, and establish a Satanic Despotism.

Dialectical and historical materialism was to be used to further these plans. Strange though it may seem, history will prove that leaders of both the Semitic and Anti-Semitic groups have on occasion joined forces to fight against a common enemy such as the British Empire or the Christian religion And while the masses fought, the Illuminati, who constitute the Secret Power behind the World Revolutionary Movements, jockeyed for the best position from which they would derive the greatest future benefit.

In the final analysis, none of the countries and people involved in the wars and revolutions obtained any lasting benefits. No permanent or satisfactory solution was reached regarding the political, economic, and religious issues involved. THE ONLY PEOPLE TO BENEFIT WERE THE SMALL GROUP OF MONEY-LENDERS WHO FINANCED THE WARS AND REVOLUTIONS, AND THEIR FRIENDS AND AGENTS, WHO SUPPLIED THE ARMIES, THE SHIPS, AND THE MUNITIONS. It is important to remember that no sooner was the Dutch General sitting upon the throne of

England than he persuaded the British Treasury to borrow £1,250,000 from the Jewish bankers who had put him there. The school book history informs our children that the negotiations were conducted by Sir John Houblen and Mr. William Patterson on behalf of the British Government with money-lenders WHOSE MEN= REMAINED SECRET. Search of historical documents reveals that in order to maintain complete secrecy the negotiations regarding the terms of the loan were carried on in a church. In the days of Christ the money-lenders used the Temple. In the days of William of Orange they desecrated a church. The international money-lenders agreed to accommodate the British Treasury to the extent of £1,250,000 providing they could dictate their own terms and conditions. This was agreed to. The terms were in part :

Thus, for the sum of £1,250,000, King William of Orange sold the people of England into economic bondage. The Jewish money-lenders gained their ambitions. They had usurped the power to issue and control the currency of the nation. And, having secured that power, they cared not who made the laws.

Just what the acceptance of the Gold Standard meant is best illustrated by citing a simple transaction. — The directors of the Bank of England could loan £1,000 for every £100 worth of gold they had on deposit as security. They collected interest on the full £1,000 loan.

At 5 per cent this amounted to £50 a year. Therefore at the end of the first year the bankers collected back 50 per cent of the amount they had originally put up to secure the loan. If a private individual wished to obtain a loan, the bankers made him put up security, in the form of property, stocks, or bonds, much in excess of the value of the loan he required.

If he failed to meet payments of principal and interest, foreclosure proceedings were taken against his property, and the moneylenders obtained many times the value of the loan. The international bankers never intended that England be allowed to pay off the national indebtedness.

The plan was to create international conditions which would plunge ALL nations concerned deeper and deeper into their debt.

As far as England is concerned, in only four years, 1694 to 1698, the national debt was increased from one to sixteen million pounds sterling.

This debt accumulated because of wars. It is interesting to note that John Churchill, 1650-1722, became the leading military figure during this period of English history. Because of his military genius, and his services to Britain, he was created the first Duke of Marlborough.

The Rockefeller’s alone, who displayed great eagerness for the US to enter World War One on the British side, made in excess of $200,000,000 from that conflict, and in just one afternoon during the war. The bankers made forty billion dollars profit out of their transactions in World War Two.

The Secret Power behind the World Revolutionary Movement pulled the necessary strings and brought about The Wars of the Spanish Succession.

In 1701 the Duke of Marlborough was made Commander-in-chief of the armed forces of Holland. No less an authority than the Jewish Encyclopedia records the fact that FOR HIS MANY SERVICES THE DUKE OF MARLBOROUGH RECEIVED NOT LESS THAN £6,000 A YEAR FROM THE DUTCH JEWISH BANKER, SOLOMON MEDINA.

As an Irish economist remarked “Only a Jewish controlled organization would insist on the odd pound.”