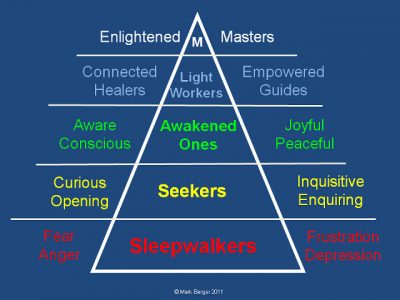 The Guru is God Himself manifesting in a personal form to guide the aspirant. Grace of God takes the form of Guru. To see the Guru is to see God. The Guru is united with God. He inspires devotion in others. His presence purifies all.

The Guru is verily a link between the individual and the Immortal. He is a being who has raised himself from this into That, and thus has a free and unhampered access to both the realms. He stands, as it were, upon the threshold of immortality; and bending down, he raises the struggling individuals with his one hand, and with the other lifts them up into the empyrean of everlasting joy and infinite Truth-Consciousness.

The Guru is the Divine God. He is an ocean of bliss, knowledge and mercy. He is the captain of your soul. He is the fountain of joy. He removes all your troubles, sorrows and obstacles. He shows you the right divine path. He tears your veil of ignorance. He makes you immortal and divine. He transmutes your lower, diabolical nature. He gives you the rope of knowledge and saves you when you are drowning in this ocean of Samsara. Do not consider him to be only a man. If you take him as a man, you are a beast. Worship your Guru and bow to him with reverence.

Guru is God. A word from him is a word from God. He need not teach anything. Even his presence or company is elevating, inspiring and stirring. The very company itself is self-illumination. Living in his company is spiritual education.

The Need for a Guru

For a beginner in the spiritual path, a Guru is necessary. To light a candle, you need a burning candled Even so, an illumined soul alone can enlighten another soul.

The aspirant who is under the guidance of a Master or Guru is safe from being led astray. Satsanga or association with the Guru is an armour and fortress to guard you against all temptations and unfavourable forces of the material world.

All great ones had their teachers. All the sages, saints, prophets, world teachers, incarnations, great men have had their own Gurus.

A true, God-illumined guru is one who, in his attainment of self-mastery, has realized his identity with the omnipresent Spirit. Such a one is uniquely qualified to lead the seeker on his or her inward journey toward perfection.

“Only a master, one who knows God, may rightly teach others about Him. To regain one’s divinity one must have such a master or guru. He who faithfully follows a true guru becomes like him, for the guru helps to elevate the disciple to his own level of realization.”

God doesn’t teach through mystery, but through illumined souls. God is invisible, but He becomes visible through the intelligence and spiritual perception of one who is in constant communion with Him. T

The guru is the awakened God, awakening the sleeping God in the disciple. Through sympathy and deep vision, a true guru sees the Lord suffering in the physically, mentally, and spiritually poor, and that is why he feels it his joyous duty to assist them. He tries to feed the hungry God in the destitute, to stir the sleeping God in the ignorant, to love the unconscious God in the enemy, and to waken the half asleep God in the yearning devotee. And by a gentle touch of love, he instantaneously arouses the almost fully awakened God in the advanced seeker. The guru is, among all men, the best of givers. Like the Lord Himself, his generosity knows no boundaries.

The word Guru means “remover of darkness.” Anyone or anything that helps you remove the layers of ignorance covering your true essence is a type of Guru.

Guru is not the body, Guru is light, Guru is wisdom, and light and wisdom are essential in human life. When one’s life and wisdom are inseparable, then you call them Sadhguru or Guru.

It is said once you have a Guru, then the job is done! Freedom is achieved.

The guru’s primary role is to give the disciple complete liberation — freedom from rebirths, karma, any and every form of misery.God in the form of the guru brings the yearning truth seekerback to Himself.

The goal of Yoga which is union with God is an inner goal and a part of us that we already possess but are not aware of or in touch with, therefore it can greatly expedite our progress to accept the help of someone who has already achieved this union and has a free access to the God consciousness that lies within all of us.

A Guru is not only working on earth for his direct disciples but for many other individuals who are crying for peace and happiness in the inner worlds and may never even meet the Guru, but are able to receive from the Gurus meditative offerings. A God-Realised Master’s presence on earth has a profound effect on the collective earth consciousness. Even if a God-realised Yogi does not accept disciples, the power of their meditation is able to elevate the global consciousness and perhaps even prevent the destruction of humanity. Because of their expanded consciousness and tremendous oneness with humanity, the great Masters are very connected inwardly with the events of the world and feel the ripple effects that they create as part of their own reality.

“The spiritual path is beset with many obstacles. The Guru will guide the aspirants safely and remove all sorts of difficulties they have to face. He will inspire the students and give them spiritual powers through his blessings. Guru, Isvara, Truth and Mantra are one. There is no other way of overcoming the vicious worldly Samskaras of the passionate nature of raw, worldly-minded persons than personal contact with and service to the Guru.

A personal Guru is necessary in the beginning. He alone can show you the path to attain God, who is the Guru of Gurus, and obviate the snares and pitfalls on your path. Guru’s Grace is needed by the disciple. This does not mean that the disciple should sit idle and expect a miracle from the Guru to push him directly into Samadhi. The Guru cannot do Sadhana for the student. It is foolish to expect spiritual attainments from a drop of Kamandalu water from the Guru. The Guru can guide the student, clear his doubts, pave the way, remove the snares, pitfalls and obstacles and throw light on the path. But it is the disciple himself who has to walk every step in the spiritual path.”

Although the grace of the guru is seen as the supreme means by which kundalini is awakened and realized.

The attainment of the four objects of life – Dharma , Artha , Kāma and Mokșa is the main purpose behind kundalini yoga. The Role of the Guru Kundalini is the cosmic power present in all human beings.

The Guru with his own kundalini awakened, energises that of the disciple. He flows his shakti dormant at his nave, through his eyes. The Kundalini of the Shishya also becomes energised.

If anything, anywhere, is abstract, the Supreme Spirit can only be described as the ulti-mate abstraction. The devotee, forever unable to visu-alize that state of being as it really is, should visualize it in its concrete expressions, as Jesus Christ or some other master—or, if he is blessed to have one, his own guru—and pray mentally, “Make me aware of your con-sciousness within and around me. I offer myself up to you for transformation, for you alone see my divine potential. May my thoughts become your divine inspi-rations; my consciousness, your infinite bliss. Intro-duce me to God!” In India, it is customary for the disciple to touch his guru’s feet on meeting and on taking leave of him. This gesture is deeply symbolic. The feet represent that part of the body which is farthest removed from the person’s state of consciousness. The guru represents one’s physical link with the Divine. He may be com-pared to an inverted pyramid, of which the body is the tip. The pyramid extends upward and outward from that tip to infinity. To touch the guru’s feet is a way of saying, “Every part of you is holy to me, for what I see before me is my gateway to Christ consciousness.”

Release your light, finally, from its earthly confines. See it streaming outward in bliss to embrace the solar system,

Meditate daily on this expansion of pure light and love, until you find your consciousness soaring on wings of inspiration to God. As the Bible says, “My thoughts are not your thoughts, neither are your ways my ways, saith the Lord. For as the heavens are higher than the earth, so are my ways higher than your ways, and my thoughts than your thoughts.” (Isaiah 55:8,9) May His consciousness of bliss, light, and love become at last the realization of your own Self! 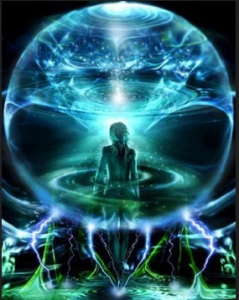 Through spiritual practice when one achieves the spiritual level of 60% it begins to rise from the base of the spine through the Central channel (Sushumnanadi) right till the top of the head. While it does so.the Kundalini awakens each of 7 chakras along the way. Whatever the spiritual path may be. when there is a spiritual growth. the Kundalini rises exclusively by the pace of the Guru (Spiritual master) then it automatically travels upwards and transforms the spiritual seeker. No person on the earth can awaken his own kundalini shakti without the grace of the God-realized spiritual master who transfers his spiritual energy called the kundalini energy unto his disciple after he has become qualified to receive such an extremely powerful energy.The energy which rises through the Sushumnanadi and reaches till the top of the head and opens up all the seven chakra’s which was lying closed.One’s the energy crosses the last chakrawhich is the Mtaster chakra it confirms or ensures the union of soul and the Supersoul