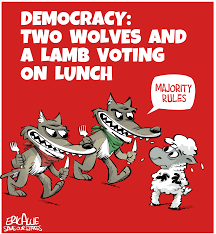 A dictionary definition of a deep state is that it refers to `organisations such as military, police, or political groups that are said to work secretly in order to protect particular interests and rule a country without being elected’.

According to Wikipedia, ‘a deep state, also known as a state within a state, is a form of governance made up of networks of power operating independently of a state’s political leadership in pursuit of their own agenda and goals’.To the Politics Dictionary:

The Deep State is believed to be a clandestine network entrenched inside the government, bureaucracy, intelligence agencies, and other governmental entities. The Deep State supposedly controls state policy behind the scenes, while the democratically-elected process and elected officials are merely figureheads. … Deep State has since come to mean any “shadow government” operating behind the scenes of a democracy. If true, this would mean that the democratic process is a facade.

The Deep State is organised, autonomous and possesses its own hierarchy and rules. Parallel to the regular state, the Deep State possesses its own ideological state apparatus that is used to fine-tune the democratic discourse to suit its needs (see Althusser 1970). It does so through manipulation of public opinion, using various means including the engineering of crisis and national security emergencies.

What will “utopian America” be like under Marxist rule if the progressives win? Orwell’s 1984 is a good place to start. Here is a quick synopsis. America will be like Oceania. Oceania is a totalitarian dystopia controlled by the Inner Party [the Democratic Party]. It is a country of perpetual government cover-up, widespread government surveillance, and government manipulation of society. Sound familiar? The Ministry of Peace oversees war and defense. The Ministry of Plenty oversees economic affairs — rationing and starvation. The Ministry of Love oversees law and order — torture and brainwashing. The Ministry of Truth oversees news, entertainment, education, and art — propaganda. The controlling political party [the Inner Party, i.e., Democratic Party] is not interested in the good of the people but seeks power for its own sake. It persecutes individualism and individual thinking. The government rewrites history so that historical records support the Inner Party’s propaganda.

In time, we will have the power to forge a new path forward, exposing the truth about the deep state’s manipulation.

The government’s “deep state” is a bureaucratic network power structure of unelected high-ranking career employees in the upper levels of the government and the intelligence agencies.

They openly and sometimes covertly, control and manipulate policies, pulling strings behind the scenes.
They often are referred to as the swamp, or “shadow government.”
They use and influence elected officials to the extent that officials, as a body, are often corrupted and ineffective.

The deep state attempts to regulate the direction of the country by controlling the programs and policies. Climate change programs are favored, and higher corporate taxes and more corporate regulations are supported.

The deep state are power-seeking, self-anointed policymaking bureaucrats orchestrating policies to benefit their continued control of the government. Some politicians work knowingly in partnership with the deep state to enrich themselves and preserve their positions of power.

The deep state bureaucracy is almost impossible to root out because of the lack of informed electorate participation in the election process. The corrupt swamp, “the Washington DC powerful,” continues to exist, facing little resistance to stop them.

The deep state environment in Washington is a corrupt and toxic climate, a swamp. It is a culture of greed and power-grabbing working to disrupt any efforts for changes.

Their efforts involve manipulation or control of government policy promoting their ideologies. They resist change that would affect their power and fight to maintain the status quo for their interests.

The deep state works diligently to destroy officials in their way and those trying to get rid of them.

They aim to control the government process with lies when necessary and manipulation when needed, operating in the shadows under a shroud of secrecy.

Their motives are self-serving to maintain their power and control. The deep state bureaucrats keep the public in the dark without facts as they grow their administrative control, resisting efforts of anyone attempting to change the power structure.

The deep state is cancer within the government bureaucracy with its own set of rules and morals. It damages America from within and constructs stories and engages in leaks to a corrupt media to serve its interest.

Global Elites are a group of the wealthiest and/or inf luential people in the world. They hold a disproportionate amount of wealth, privilege, and political power in society and strive to create a one-world order.

For the most part, they hold socialist beliefs and use their wealth and power to promote their views. They are committed to doing whatever is necessary to forward their agenda of control, domination, and a one- world order.

Global Elites are skilled “artisans,” furthering an indoctrination to the poor and uninformed, peddling a velvet cloak of socialism. Masked with deception, thread by thread, they weave their socialist views, selling comfort and warmth and seducing the masses with beliefs of security.

The consequences of global elites’ positions are less freedom and liberty for the people and the eventual breakdown and loss of democracy. Hidden by the cloak of socialism, in a shroud of darkness, are the flaws of empty promises and the failure of the elites to explain what they cannot and never will provide.

Their all-encompassing ideology is to replace sovereign nations by whatever means possible, using misinformation to promote their self- serving agenda. The New World Order is a globalist agenda by the secretive power elite to rule the world through an authoritarian world government.

Since the man of lawlessness remains surreptitious until he is “revealed,” (2 Thessalonians 2:3) it is logically consistent that he emerges from a covert power structure. The cabal that secretly controls world governments through its iniquitous “behind the scenes” methodologies, is the ideal breeding ground to develop and groom the devil incarnate. It is the consummate entity for him to rise through the ranks to a position from which he can assume ultimate global authority and control. I believe he will be unknown from a political perspective and seemingly come out of nowhere to assume the reigns of the final one world government. He will be no stranger to power however, as he will emerge from obscurity well versed in backroom deals, corrupt negotiating tactics, and coercion skills learned while ascending the hierarchy of the deep state.

WHO asserts its influence and governments fall into line. While politicians come and go, there is a hidden power structure dictating every move. It is a heinous, unscrupulous force that controls and runs the world behind the scenes and its only morality is money. It is the cabal.

These various different groups supposedly constitute a shadow government which looks after the day-to-day operation of the state but, crucially, also works against anyone it considers to be opposed to its interests or values. And it does this all by covert means, and removed from the scrutiny of the democratic system.

When systems of governing are studied, there is the inevitable royal line that is involved with some sort of Deification process. These striations of society provide outward signs of superiority in the rulers, indicating a special and powerful ability to communicate with, or embody, the Deity so that those who rule can rule absolutely, and the notion that citizens might ascend to the ruling class is absurd to consider.

In more recent forms of government there is the idea of the power of the collective, the representation of the masses by those entrusted with power, and some sort of relationship with a moral or ethical standard reflected in the tenets of the religious beliefs held by the citizenry. Churches reflect all of these elements in one form or other as well. In a cynical point of view these are theater of manipulation, often ruling behind the force of fear.

But this idea falls apart when history is studied. Communication with unseen forces, and the critical need for the message originating with these forces, is in evidence as an essential ingredient to being human. And the power of faith is, in all systems, supreme.

There is no cynical manipulation in this; rather it is there because of who we are. And no matter how many rulers get lustful with power and succumb to it in all manner of madness, the fact is that we need Spirit, we must have faith, and there are those upon whom we rely who can bridge the gap with the unseen and invisible source of this brilliance. This ability is called Mediumship.