Kundalini awakening is the sole purpose of creation. We can access any information “out of thin air. The true identification with the Self is only possible when the Kundalini is settled in the seventh chakra.

Kundalini, we must remember, is a force of the non-ego and for the ego to try to manipulate it will only serve to inflate the ego, taking it eventually to a point where it is likely to break and disturb the nervous system. Kundalini is a force of nature like lightning that is beyond our personal control or our ability to predict. To safely arouse the requires the right life-style, emotional balance and power of concentration. In fact, if one has the right preparation, particularly Kundalini the inner Soma to attract it, the harmonious manner. Kundalini will arise in a gentle and is a sacred spiritual force, a power of the Goddess that we must approach with reverence, respect, devotion and humility.

When your heart is opened by the flow of the kundalini energy, the barrier of ego breaks down and the mind clears, allowing cre-ative energy to flow through. There is an exchange of energy that is uplifting and healing the kind that makes life worth living.

We can access any information “out of thin air.

The complete covering of the brain and the calcification of the fontanel bone separates human beings from the All-pervading Divine Power. In this way humans develop their “I-ness” or own identity. When both ego and superego are balanced by the temperate life of devotion of a householder, the Kundalini awakened through Sahaja Yoga, breaks through the centre of the brain. She takes the attention of the seeker into the All-pervading Power, the Universal Unconscious.

His attention moves onto the left or the right side of the system according to the nature of his activity. Any energy that is needed for this activity comes from the Ida or Pingala Nadis, and the Deities which are placed at the centre of the chakras (see Figure) decide the appropriate mode of action. The two parabolae of energy emerge from the two sides on the Pingala and Ida Nadis, one in a clockwise direction, the other in an anti-clockwise direction. The energy needed is transformed by the Deities. They are in contact with the seats of the subtle centers (Peethas) in the brain, and also with the auras of the Spirit that encircle the Divine Spirit (Atma) in the heart.

The will of the Divine for you is evolution. These forces are made to help your evolution only if you strive against them. If you yield to them, you only strengthen them. Therefore, Krishna says, “0 Arjuna, stand up and fight. Do not be supine; do not yield yourself to the forces; they are there to call out your energies by opposition and you must not sink down on the floor of the chariot.

Ego does not exist in true dominant people. Ego is not power it is a sign of weakness which can be broken at the will of a dominant. Ego is an energy that only has power to create broken people and broken souls.

Is there any connection between citta and Kundalini?

Dr. Jung: Citta is the conscious and unconscious psychic field, collective mentality, the sphere in which the phenomenon of Kundalini takes place. Citta is simply our organ of knowledge, the empirical ego into whose sphere Kundalini breaks.2 Kundalini in essence is quite different from citta. Therefore her sudden appearance is the coming-up of an element absolutely strange to citta. If she were not entirely different from citta she could not be perceived.

Psychic energy is draining from the Ego, and at one point you talk about the black hole. The energy that leaves consciousness and therefore affects the Ego by a growing sense of non-ego or loss of affective memory, this psychic energy is going somewhere. It is falling into the depths and setting the stage for the activation of kundalini, or from a psychological perspective, the activation of the unconscious and its contents symbolized by the water just beneath the surface and the presence of the fish. The old Philip has to die because the center of the personality is no longer the Ego.

The true identification with the Self is only possible when the Kundalini is settled in the seventh chakra.

The Adi Shakti, the Energy, the Holy Spirit is manifested within man when Kundalini awakens from Her potential state at the bottom of the spine and actualises Herself in the Sahastrara: this is the state called self-realisation, the manifestation of the Kundalini aspect of the Holy Spirit in the Sahastrara. Lord Jesus said: “What is the Kingdom of God like and to what shall I compare it? It is like a grain of mustard seed which a man took and sowed in his garden and it grew and became a tree, and the birds of the air made nests in its branches.” (Luke 13.18) The psychosomatic and spiritual instrument is manifested by the rising of the Kundalini. And again, “To what shall I compare the Kingdom of God? It is like leaven which a woman took and hid in three measures of flour till it was all leavened”. (Luke 13.20). The alternative phases of potentiality and actuality of the Shakti-Kundalini are the substance of this statement.

The Sushumna and the chakras are the royal drive to be adorned and garlanded for the rising of Kundalini. Therefore all the scriptures and saints suggested that the best way to prepare this path is to lead a dharmic, virtuous life. All the Sahaja Yogis of the five continents now bow to the dictates of all the real Gurus, prophets and masters. When Kundalini transfigures our awareness in Her ascent, our cognitive faculties merge in a new dimension: the physical, emotional, mental, spiritual beings in us are synthesised by the spontaneous force of the primordial energy. In other words we are perceiving through one unique, fully integrated instrument: as previously said, the vibrations are felt in the fingers or even in the toes! … as well as in any single part of the body depending upon the case. The whole of the human body is a temple of the transformation. 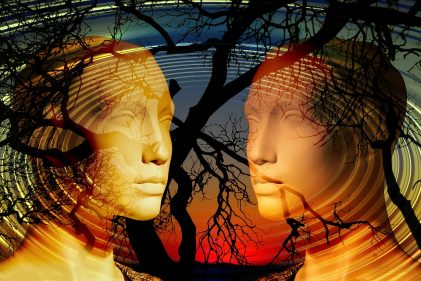