Kundalini and Soma – Forms and Powers. Men, as soon as they discover this most secret place, become free from rebirths in this universe. The proper awakening of the Kundalini provides a tremendous energy and inspiration, a vast widening of the consciousness, and can aid in deep healing, rejuvenation and longevity.

Without the proper prior preparation of the Soma or nectar in the crown chakra, the Kundalini fire can overheat and burn up the nervous system, depleting our Soma and even reducing our longevity. That is why for anyone who seeks to develop the Kundalini, developing the corresponding Soma is imperative. In fact, if one develops the Soma above, the Kundalini will naturally arise to partake of it. No other effort, action or practice may be required. On the other hand, if one seeks to develop the Kundalini and has no inner Soma, the Kundalini will be irritated, not awakened. We must remember that Kundalini awakens in search of the Soma. To awaken it without Soma is to awaken a serpent but have nothing to feed it. Meanwhile to awaken the Kundalini in a positive manner, we must also stop seeking the outer Somas. It is the outer Somas of sensory enjoyment and ego imagination that keep the Kundalini asleep.

The proper awakening of the Kundalini provides a tremendous energy and inspiration, a vast widening of the consciousness, and can aid in deep healing, rejuvenation and longevity. Yet as a powerful electrical force, Kundalini can be difficult for the nervous system to handle, particularly in the case of practitioners who are not adequately prepared to handle its powerful currents. We must be able to endure and sustain the awakening of its power, which requires the necessary Soma, calm and peace.

There tends to be an overemphasis on Kundalini in modern books on Yoga and the chakras, which rarely emphasize the necessary preparation for arousing this powerful force or the necessary factors for keeping it in balance, once aroused. There is a naive thinking that one can manipulate the Kundalini mechanically by personal effort, through certain asanas, pranayamas, bandhas, mantras or yoga kriyas, largely of a physical or mechanical nature, as if it were little more than a matter of technique to get it to move.

The role of Soma in the awakening of higher consciousness is probably more important than that of the Kundalini, though it is a secret not easily found. If one’s Soma is not first protected and prepared, the rising of the Kundalini can have side effects or fail to occur altogether. If our Soma or inner mind is pure, the Kundalini will naturally arise to receive it and will do so with grace and gentleness. Kundalini, we must remember, is a force of the non-ego and for the ego to try to manipulate it will only serve to inflate the ego, taking it eventually to a point where it is likely to break and disturb the nervous system.

Kundalini is a force of nature like lightning that is beyond our personal control or our ability to predict. To safely arouse the Kundalini requires the right life-style, emotional balance and power of concentration. In fact, if one has the right preparation, particularly the inner Soma to attract it. the Kundalini will arise in a gentle and harmonious manner. Kundalini is a sacred spiritual force, a power of the Goddess that we must approach with reverence, respect, devotion and humility. To allow the Kundalini to arise in the best possible manner, we must first prepare our Soma. This means developing the cool, content, meditative mind of the crown chakra or lotus of the head. It requires that we ourselves, particularly our psychological natures, become the Soma and allow ourselves to be purified and consumed by the higher forces. As a power of fire. Kundalini requires our own internal purification or tapas. We must be willing to burn up our own ego in the Kundalini fire, which occurs in the lower chakras where both the ego and Kundalini dwell.

Kundalini as the Shakti naturally seeks out this detached Shiva energy or Soma, which is her lord. If an undetached motivation awakens her, she will not be happy. The yamas and niyamas of Yoga help purify the Soma, as do the other limbs of Yoga, if applied in the right manner, notably pranayama, mantra and meditation. We must learn to breathe in the Soma, which occurs through the third eye, when the mind and breath are calm and balanced. This hap-pens when our mind has no burden of memory and our emotions have been transformed into devotion. This unitary breath is the basis of both Soma and Kundalini, which are the water and fire aspects of this primal Prana or air energy. When the Soma in the crown chakra fully develops it overflows and descends to purify the body and to collect in the ocean of the spiritual heart that is its final abode. That is why Soma is closely connected to the heart as well.

The chakras can only be opened by an expansion of that inner space of awareness, not as mere physical locations, emotions or personal powers. Sushumna means ‘what is very blissful’. It is our inner space in which the Soma can flow. Higher Yoga practices require opening the Sushumna or central channel of the subtle body. Otherwise neither Kundalini can arise nor can the Soma descend. This opening of the Sushumna in turn requires releasing the knots of the heart, letting go of our deep seated fears, desires, anger and attachment.

Without developing our inner Soma, there is no space for the higher energies to move within us. To reach that inner space requires the unification of the dualistic energies inside us, which are mirrored in the duality of our breath, thoughts and emotions. We must go beyond inhalation and exhalation, attraction and repulsion, like and dislike.

Soma is the key to all higher Yoga practices, the magic, the nectar and inspiration that allows them to work — and the flow of grace that takes us beyond personal effort. Learning this yogic alchemy of Soma is the true immortal art. It not only revitalizes the body but also creates within us a consciousness that can endure beyond death.

The Arising of the Shin or Purusha Energy Along with the ascent of the Kundalini, there needs to be a complementary ascent of the soul, an arising of the Shiva consciousness, which is part of the awakening of the Purusha or higher Self. This is experienced as an ascent of calm and expansive force, around which the Kundalini spirals and is held. This rising Shiva energy, symbolized by the linger or pillar of Shiva energy, affords stability to the mind and nervous system. This ascending Shiva force rises to reach the immutable immortal Shiva force in the head. Yet it is also like the power of a mountain. It is on that mountain of Shiva that the Soma can be found. Like Kundalini, with which it is connected, this ascending Shiva energy is fiery. It needs to be continually cooled through pouring the water of Soma over it.

The ascending Shiva energy is also called the Hamsa, which means both the Prana and the bird of the soul. It flies upward with the breath as it were. Hamsa is also the bird that dwells on the lake of the Soma. As the higher spiritual fire and light energy arises within us. whatever name or form we give it, we must learn to bathe it with the descent of water and grace which is Soma. This bird of Soma becomes the eagle of higher perception as the flow of Soma cleanses the doors of our perception and opens us up to the vision of all things as infinite and eternal.

During realization, the Kundalini absorbs the ego and the superego. Thoughts fade away. There is no past, no future. All that remains is reality, that is, the present. And in the present the Spirit, shining in the heart.

The ancients say that when kundalini travels into the void region (sahasrara), she remains only momentarily, then returns to muladhara (root chakra). Only by consistent practice does divine union become permanent. When Shakti unites with Paramashiva in sahasrara, the perfected siddha (adept) becomes jivan mukti (liberated soul), dwelling in eternal bliss, possessing all powers. As kundalini travels through the chakras, she exhibits various forms:

1. In root chakra (muladhara), she is Kula (root, lineage, dynasty) Kundalini. Here she rests in samadhi (transcendence) as svayambhu linga. She is a nonentity, as if asleep.

2. When awakened, she is termed Vahni (fire) Kundalini, deep red in color as she moves from muladhara to the heart chakra (anahata).

3. In anahata, she becomes Surya (Sun) Kundalini of brilliant vermilion color as she moves to the bottom of third eye chakra (ajna).

4. In ajna, she is called Chandra (Moon) Kundalini, white and nectarous as she travels to nirvana chakra.

5. In sahasrara, she becomes Turya (fourth state) Kundalini—samadhi, beyond the three states of waking, dreaming, and sleeping. Here she is the nature of pure consciousness, experienced in samprajnata samadhi.

While in the luminous triangle of sahasrara, kundalini exhibits three aspects: 1. Her ama kala form, the experience of samprajnata samadhi. 2. Her nirvana kala form, beyond samprajnata samadhi, into which she absorbs even samadhi consciousness by virtue of her power of supreme control (nirodhika vahni). 3. Her nirvana shakti form, the all-absorbing kundalini power. Here she absorbs Prakriti, Purusha, and Maya, and passes into supreme void, the circular region within the luminous triangle. The center of the void is Shiva. Kundalini coils around the circular void, forming the circumference. The void, experienced only in asamprajnata samadhi, contains four aspects: supreme bindu, supreme nada, Shakti, and Shiva.

• Kundalini’s third coil is around Shakti, which she then absorbs.

• Kundalini coils halfway around Shiva, whom she unites with and absorbs.

• Kundalini is then without coils and is absorbed into Paramashiva. This is the final stage of asamprajnata samadhi—the supreme absorption.

“Men, as soon as they discover this most secret place, become free from rebirths in this universe. By the practice of this Yoga, he gets the power of creating or destroying the creation, this aggregate of elements. When the mind is steadily fixed at this place, which is the residence of the Great Swan and is called Kailas, then that Yogi, devoid of diseases and subduing all accidents, lives for a great age, free from death.” —Siva Samhitas 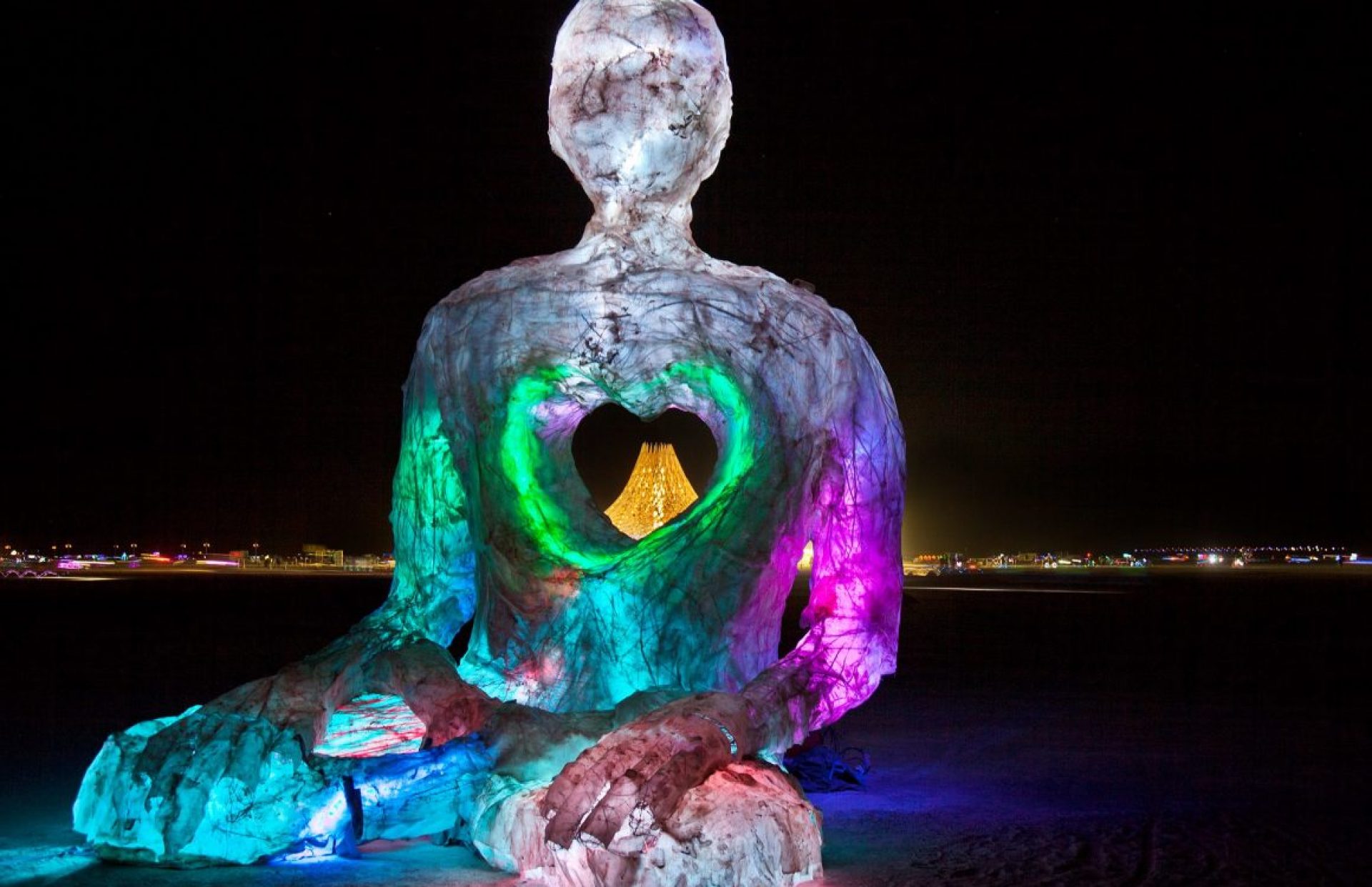 A great transition occurs when we traverse the diaphragm from the solar plexus to the heart center. In order to interpret universality with total freedom, one must transcend the material levels of existence. It is impossible to reach deep understanding if we remain bound by the three-dimensional consciousness, limited to the physical, emotional and mental planes. Unless we become freed from earthly ties, from the left side consciousness and from everyday life, our consciousness cannot contact the intelligent worlds that inhabit the infinite universe.

Heart—The Cosmic Antenna, Heart—A Powerful Force. The heart is, in fact, a highly complex, self-organized information processing center with its own functional “brain” that communicates with and influences the cranial brain via the nervous system. Oneness through the Heart

Kundalini awakening can be described as an initiation to a deeper relationship with creation. We are part of a grid of energy and Kundalini helps us to realize this. This knowledge will strengthen your inner spiritual force