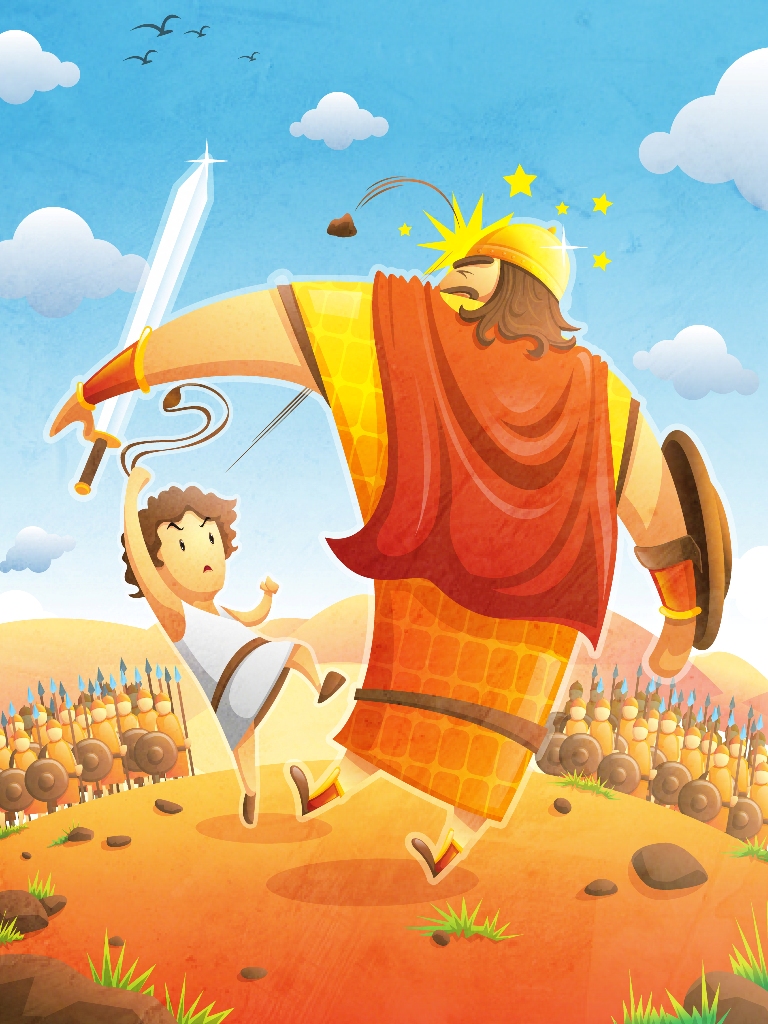 David and Goliath; The word gath comes from Hebrew and means “wine press.” In other words, Goliath is simply the boundless primary energies that are pressed out in the Mental Matter plane as the wine of lift. It is not surprising therefore that the location of this alleged town of Gath has never been determined, for it represents the primal plane where the elementary life force is pressed out for the use of self-aware consciousness.

All the important features about the David myth are structured upon the Gemini lessons and progresses through the plane of Etheric Matter (Leo). His father’s name is given as Jesse, and the name means, “to be,” which is the concern of Gemini.

David personifies the Life Principle that rises from shepherding elementary energies to presiding over the involutionary realms of matter development into planetary development.

He therefore personifies the amoral universal will and as such is the “sent prince” or “guardian,” or the “victorious,” presiding over involutionary development of prototypal forms from Mental Matter through Etheric Matter.

This accounts for all the deceitful character traits and treacherous deeds of David that were overlooked and actually portrayed as being blessed by a curiously apathetic God. The only way the starring characters of any biblical myths can be exonerated for committing equally gruesome acts is to understand that they all personify some aspect of the amoral preplysical energy movement.

As such, the starring characters of scriptural myths that personify those involutionary energies have no genuine historical claims. The Zodiac teachings addressed these amoral/innocent creative conditions directly, not as personifications, and they brought a truer understanding of divine purpose.

Certainly the Zodiac lessons were much saner in their presentation than the biblical insinuations of godly favor for preferred or chosen peoples that spawns so much hatred, prejudice and conflict in human affairs.

An important clue to all biblical myths is hidden in the implied chronology. To trust in biblical chronology is to take sacred language at face value, and that language form is intentionally designed to keep the masses subjected to ignorance, not enlightenment.

David, for example, is claimed to be removed from the patriarch Jacob by nearly 1000 years. Even encyclopedias present this myth as fart, but the chronology is not verifiable by any references other than scriptural fiction.

In fact, even biblical mythology repeatedly contradicts itself in matters of chronology. The scriptural timetable implies that an enormous period of time is accounted for in the books of Exodus, Joshua, Judges, and Samuel.

The claim is that the Israelites were in Egypt for 430 years, wandered in “the wilderness” for 40 years, and suffered “bondage” to other nations for a minimum of 200 years. So it is implied that 700 to 1000 years separate Jacob from David.

In the later book of Ruth, however, it is stated that David was tenth generation from Pharez, the twin brother of Zarah, and Pharez was a contemporary of Jacob. Ten generations do not account for 700 to 1000 years except mythologically. Jacob was the twin of E’sau, and therefore represents one of the two polar powers responsible for creative action. As such, he is one of the polar conditions of the Gemini lessons where energy “dominates” or enfolds consciousness as defined forms.

The name Jacob—properly spelled Yakub—is derived from the Hebrew word yak, which means “unity” or “one.” The name therefore symbolizes one of the two polar divisions out of which multiplicity is brought forth. He is presented as the second born, and so he personifies energy by which everything is defined, and his “brother,” E’sau, personifies consciousness. Since everything is defined with energy, Jacob’s “name” is changed later to Israel, which signifies plurality when energy amasses as dense matter.

This implies the overshadowing principle that is active upon primordial substance by which the multitude of diverse matter forms is brought forth by creative energy. Priest mythographers therefore personified Jacob as “Father” of the twelve personifications of the Zodiac’s twelve patriarchal principles.

What this means is that Jacob-Israel is not a verifiable historical ancestor of any specific people, but represents the creative consciousness through which all life is brought forth. The twelve “tribes,” therefore, simply illustrate the classifications of creative energy planes, and not any genuine chronicled people.

The character of David, as mentioned, is inaugurated our of the Gemini lessons for he personifies the will of the Life Principle to express itself universally out of the primordial energy by creating energy patterns we speak of as matter. The two books of Samuel give David’s circuitous path to the throne in abundant detail, masking with its pseudo-chronological presentation the movement of the Life Principle through the prephysical planes of development.

That the character of David is a personification of the Life Principle exercising creative authority with universal will, which is part of the Mental Matter, is alluded to early in the story with David confronting the “giant” named Goliath, derived from the Hebrew word golyath. “Giants” commonly personify the boundless primordial energy planes in myths.

When David is brought in to confront the giant, the Israelite forces (elementary particles) are said to have stood immobile before Goliath for the typical 40 days (the four primordial planes). David is pictured as arriving at the Israelite camp bringing bread (symbolic of the life force) and cheese (congealing substances) w his seven brothers (the seven Involutionary planes leading into matter).

David volunteers to confront Goliath—the aware consciousness willingly takes up the challenge of mastering primordial powers to self-define as matter. When Goliath met with David, the giant allegedly wore bronze armor that weighed around 150 pounds, carried a massive spear, and “with a javelin of bronze slung between his shoulders.” (Samuel 17:6)

The myth is crafted with dramatic power, claiming that the enslavement of thousands of Israelites by the Philistines was to be determined by this single combat. It is symbolic also that David, who is pictured as not old enough for military service, is alleged to have slain the giant with a single blow to the center of the forehead (implying Mental Matter) with a stone (symbolic of dense matter) hurled with a slingshot. In mythic accounts, bronze and brass always represent Mental Matter, so Goliath’s armor represents the power of Mental Matter.

The weight is given as 150 pounds, which adds to six, and six is the number of accomplishment or purpose—as Creation accomplished by God in six days. Goliath is also described carrying a javelin of bronze slung between his shoulders, and shoulders and arms are the anatomical symbols of Gemini. So the preadolescent David, symbolizing the Life Principle at the plane of Mental Matter, must engage and master that energy plane that is personified with Goliath.

Another telling clue is that Goliath was said to have come from Gath. The word gath comes from Hebrew and means “wine press.”

In other words, Goliath is simply the boundless primary energies that are pressed out in the Mental Matter plane as the wine of lift. It is not surprising therefore that the location of this alleged town of Gath has never been determined, for it represents the primal plane where the elementary life force is pressed out for the use of self-aware consciousness.

The constellation boundaries of Gemini lessons separate David from Jacob by ten degrees (the 1000 years in mythic chronology), for Jacob is primarily a personification of Gemini also, and David’s relationship is established with the lesson of Canis Major, first decanate of Gemini—which can be understood as universal will. The intent of will is to immerse consciousness in self-defined energy patterns—as material-matter.

The story of David’s life therefore moves from Mental Matter through Astral Matter to the close of Etheric Matter. This is why David is said to have “died” in his 70Th year (seventh involutionary plane) from Falling down a flight of stairs on a Sabbath (seventh day), all being symbolic of the descent into dense matter, the seventh plane.