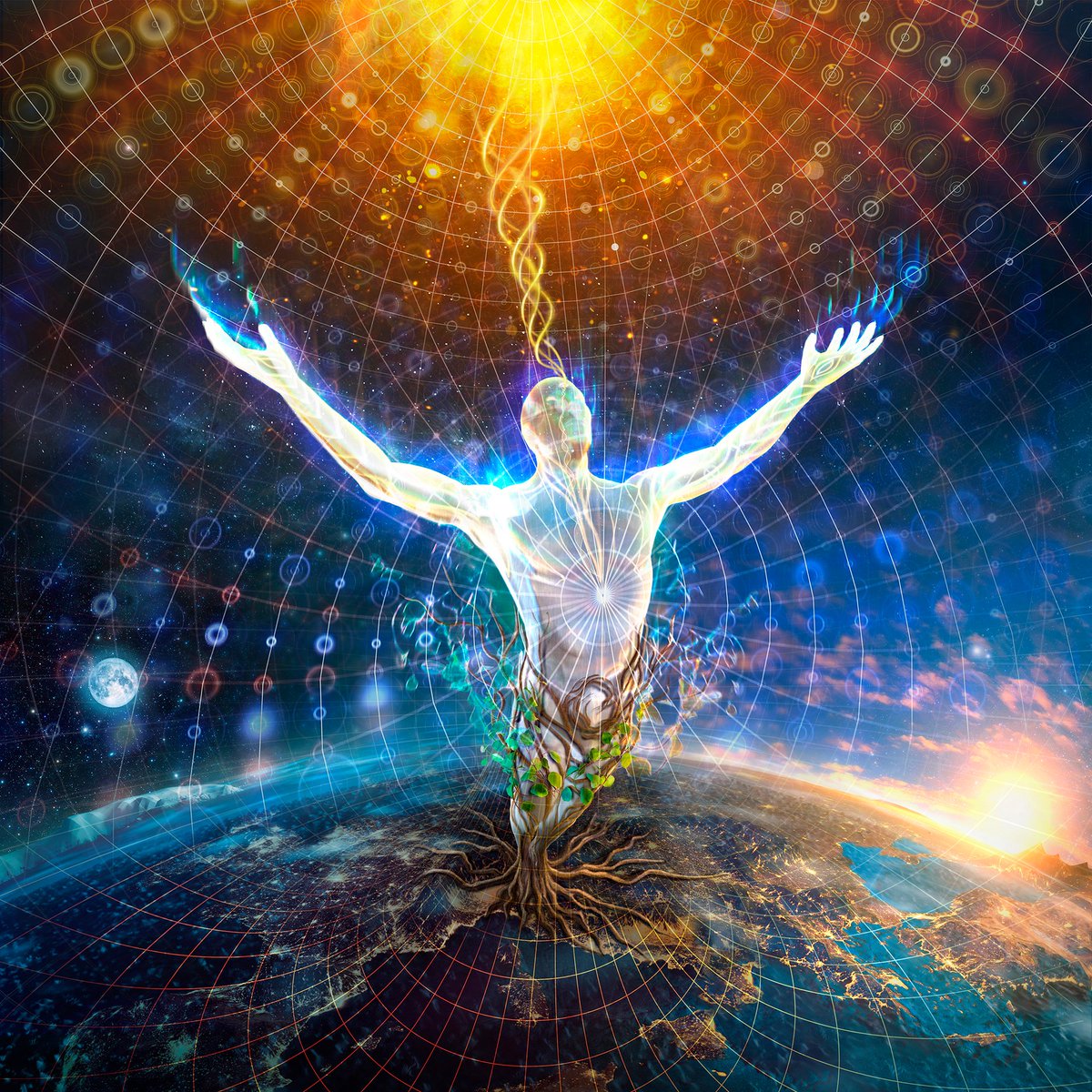 Your greatest benefit of an awakened kundalini is the culmination of the process of spiritual maturation. Kundalini arousal can bring about self-realization. The awakening of the heart is deeply profound and absolutely essential on the journey of our consciousness.

The kundalini rises as we develop spiritually, clearing in turn through all the chakras. When it reaches the crown, we are ready for reunification with God.

The key is that kundalini eventually invites the emergence of your true self, alleviating the spiritual emergency. As you emerge from the state of emergency (rather than simply living in it), you find yourself evolving, becoming more creative, peaceful, and calm.

The awakening of the heart is deeply profound and absolutely essential on the journey of our consciousness. The short pathway of kundalini energy from the navel to the heart generates a true breakthrough in consciousness. It requires letting go of a sense of self, safety, and security and trusting that our heart can carry us with light and love. Once our prana enters into the realm of the heart, our life source surges. We become connected with all those around us. It is as though the heavens open in us and our energy can flow in ways it was prevented from before. Also, when the heart is open, the mind quiets. When the mind stills, the heart can be the boss. When the heart is in charge, our lives become magical playgrounds full of fun and loving synchronicity and moments of perfect bliss.

The third bhanda, Neck Lock, allows prana to move up through the neck, awakening the third eye and pituitary gland and radiating into our aura. Neck Lock opens the fifth chakra—the throat—so kundalini energy can flow to the sixth, seventh, and eighth chakras. Without Neck Lock our energy is often blocked at the throat, and our soul light cannot reach the higher chakra frequencies of intuition, sacred wisdom, and surrender to the divine.

The traditional yogic word for Neck Lock is jalandhara Bhand (pronounced “jahlunn-dah-rah bond”), which literally means “neck lock.” Sometimes we experience a sense of fear when we begin to connect deeply to spirit, and we pull back from the cosmic breakthrough that happens when energy flow reaches the third eye and awakens intuition. If you feel fear, please remember that prana is love. There is no reason to do any of this except to awaken and blossom so the fragrance of your soul can be sensed as part of you.

The third eye is where we discern the unseen reality behind the surface, the eternal ebb and flow of the energy of life. The intuition requires complete neutrality in order not to shrink back. The crown chakra, at the top of the head, is the gateway to our rare divine consciousness. And in the aura we become an integrated, coherent whole rather than a series of separate chakras. The line between our finite idenity and infinite consciousness becomes blurred. We blend. We are not separate.

As the kundalini moves upward it strikes against the downward-facing lotuses (chakras) in order, starting from the lowest, causing them to undergo involution and bloom upward. In other accounts the ascending lcunclalinl is said successively to pierce, heat up and burn the various chakras. Some yogis assert that the kunOalini travels no further than the heart chakra, and that once the heart chakra is reached the kunclalini makes it her perma-nent home and does not return below it again. As each chakra is animated, different nimitta, ‘signs’, make their appear-ance: the heat of the body increases, the skin sweats profusely, a stinging sensation ‘like a scorpion’ is felt. Simultaneously the corresponding siddhis* (occult powers) are released.

Thus, by raising the lcunelalini to the mattipilra chakra (near the navel) power may be acquired over fire. Only a few adepts succeed in working the kunclalini as far as the sahasrara, near the brain. The complete process is known as shaf-chakra-bheda, ‘the six chakra piercing’. Some yogis hold that the kunclalinl has only to break through three ‘knots’ (granthi), namely, the mtiladhara or base (the knot of Brahma), the andhata or heart (the knot of Vishnu), and the ajliti or eyebrow (the knot of Siva), to reach the sahasrir’ a. Contact between the kunelalinl and sahasrara results in the flooding of the whole being with indescribable bliss. Associated with the awakening of the kunclalini are various experiences on the occult planes, which are manifested, among other things, by different stages of awareness, as each chakra is pierced. When the yogi has pierced all six chakras he listens for the inner sounds.

At first many sounds are heard: the sound of a distant ocean; then a thundering; the sound of a waterfall; then a tinkling as of ornaments; then a drum, a bell, a flute, a bee. The head becomes giddy, the mouth fills with saliva, but the adept must carry on. The sounds become more internal and more and more subtle until, from the innermost core of his being he hears the nada, the voice of the inner silence, the ‘unstruck’ and unmanifested sound*, the uncaused essence of aabda, the Word.

Accompanying this is the experience of seeing dots of light, flames of fire, coloured lines, dazzling geometrical shapes, and an ‘effulgence’, manifesting in progressive stages from the marichiki, ‘mirage’, or illusive bright images, then smoke, then bright circles of light, then the tdraka, ‘star’, a small intensely bright light seen between and in front of the eyebrows. This is followed by the prakasha, an inner illumination, which in turn is followed by the gatnana-like experience of jyoti, ‘radiance’, which has been described as `the brightness of the Self which is like a universal flame of a lamp that no wind ever disturbed’.

Moving the sphere (gold or white) from the Centre down to the Base Chakra, one activates that centre. This is the element of Earth. It appears yellow. Within it is seen Kundalini, sleeping. One awakens Kundalini using the light of the sphere and feels the powerful turbulating energy spreading out through the nadis to infuse the lower body.

On the inbreath, one draws Kundalini out of the Base Chakra into the sushumna and up to the Desire Chakra. This centre is a milky off-white which becomes red when activated. This is the element of Water. Kundalini activates this centre and strong waves of sensual

Through the kundalini process, this visualized pure body-mind then becomes actuality, for the ascent of the serpent power through the axial pathway of the body recapitulates the mental process of bhuta-shuddhi, literally changing the body’s chemistry. Through repeated practice of kundalini-yoga, the Tantric adepts succeed in speeding up the vibration of their body permanently, leading to the creation of the much-desired “divine body” (divya-deha).

Along the route, the ascending kundalini may produce all kinds of physiological and mental phenomena, which are all the result of incomplete – identification with the Goddess power and a certain attachment to the body. The Tantras mention startled jumping (udbhava or pluti), trembling (kampana), whirling sensation (ghurni), drowsiness (nidra), as well as ecstatic feelings (ananda) that are not, however, of the same magnitude or significance as the supreme bliss of transcendental realization.

Your greatest benefit of an awakened kundalini is the culmination of the process of spiritual maturation. Kundalini arousal can bring about self-realization or the recognition of the atman, knowledge of the true self. Some say it confers immortality. Triggering Awakening of the Latent Divine Energy Some yogis and yoginis say that you can attract the conditions for the awakening of the kundalini through mantra, mudra, breath work, meditation, and other spiritual practices. The kundalini awakening can occur spontaneously or through shaktipat, the transference of energy from a teacher to her student for the purpose of initiation and awakening of the kundalini Such awakening confers powers from all the energy centers of the body and brings about superconsciousness.