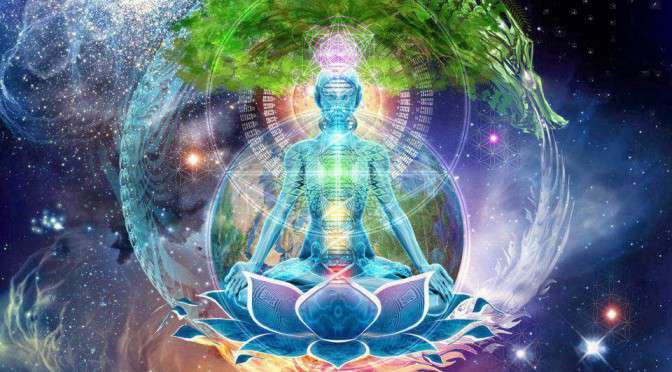 Kundalini is the reflection of the primordial energy within each one of us. Kundalini and Holy Spirit are two names of the same thing. The journey of the kundalini energy to the crown of the head is called the journey of enlightenment.

Kundalini is the cosmic power in individual bodies. It is not a material force like electricity, magnetism, centripetal or centrifugal force. It is a spiritual potential Sakti or cosmic power. In reality it has no form.

Kundalini is roused from her sleep and brought under the control of the will. When this Kundalini is roused from her sleep, she forces a passage through the different Chakras and excites them to action, and as she rises step by step the mind becomes more opened and all vision and wonderful powers come to Yogi when she reaches the brain.’  (Vasant G. Rele)

The practice aims to unite these three different flows through the power of the Ajna chakra. When that is managed, the Kundalini energy that rests dormant on the Mooladhara chakra at the base of the spine will be awakened. When the Kundalini energy is awakened, it travels up the Sushumna channel and activates all of the chakras with its power until it eventually reaches the Sahasrara chakra. That’s when your being is united with the supreme consciousness. When the Ajna chakra is awakened, it acts like it is charged with positive energy that will attract and force the negatively charged energy that resides in the Mooladhara chakra to go upward. Through that conscious control, Ida and Pingala are devitalized by the Sushumna nadi. It absorbs their energy and opens up the yogi to a transcendental state in which the perception is that time has ceased to exist.

Yoga is essentially an energetic process. The structure of the practice prepares your being gradually for that ultimate finality of union with the supreme consciousness.

Usually, the quantum of energy that is manifested in the regular person is of a very low frequency compared to the Kundalini energy; the energy that usually flows through the nadis and the nervous system is of such low intensity that it powers our bodily functions and limited consciousness deficiently compared to the full potential that we can indeed manifest. In order to awaken our hidden “super-human” qualities, the whole Pranic system has to be purified and empowered so the nervous system and the brain can sustain the higher vibration of the Kundalini energy.

A Granthi is a psycho-energetic knot or lock along the main channel Sushumna that hinders or eventually blocks the ascension of the Kundalini Shakti. Granthis act as barriers; they influence and reflect, at the same time, your capacity to discern directly the real and transcend the power of the material illusion also referred as maps.’ They need to be dissolved by the Yogi through a disciplined practice. The very first Granthi is situated at the root inside the energetic body of the Ajna chakra; it is the Br Granthi.

Though much smaller energetically than the other three Granthis, if it remains unbroken, you won’t be able to effectively access or dissolve the other ones. It is the preliminary Granthi, proportionally as big as a marble compared to the other Granthis, which would be the size of billiard balls. The Bija Granthi ranges from a deep-purple color to a blackish hue. It may be broken in many forms at a proper time and under specific and individual conditions. Each person has a precise trigger set. It is just like a seed that cracks open under the right conditions so the stem can spring forth.

According to free will and the karmic conditions that were conceded or accepted before the incarnation, adjustments are made by spiritual guides. These changes are always in the best interest of their protégé. It is the first energetic step toward progression and liberation. When that marble/knot is broken or untied, it initiates a motion of the spirit toward the spiritual life in a progression that can range from very slow to instantaneous in rare and exceptional occasions. When the Bija Granthi remains unbroken, the individual is not yet touched by any desire or will to explore spirituality, the spiritual life, or God and is not moved by any means or in any sense yet by the transcendental possibilities.

When that marble is broken, a sudden spark fires internally, pointing and hinting at the possibility of personal spiritual development—thus starts, for example, the process of faith. The process also releases a diverse qualitative experience, which varies from individual to individual and ranges from a very subtle internal transition in spiritual intuitions to a great fiery, unshakable faith. That is the reason why some people appear to be locked in their own mundane and material vision of life. The black marble needs to be broken so that guiding forces can be accessed by the mind and consciousness.

It is the very first important energetic process in which a divine spark is flared, igniting the consciousness and the mind to experience a very preliminary spiritual realization. Many people are able to recall specifically which situations, speech, people, music, books, or studies that were responsible for cracking open their being to spiritual awareness. While some people might need very little effort to open the Bija Granthi, others might need the accomplishment of a whole sequence of events and interactions to untie that knot.

Kundalini is the reflection of the primordial energy within each one of us.

The Spirit and the inner energy or reflection of the two powers within us is part of a larger package known as the Subtle Energy System. What are the mechanics behind how the two powers – the Spirit within residing in the human heart and the Kundalini energy which is lying coiled in the sacrum bone, unite in human beings? Nature intended this union to be scientific and logical. To understand how this union takes place, we must first understand how the energies themselves are formed inside human body.

The journey of the kundalini energy to the crown of the head is called the journey of enlightenment. This journey takes place when this serpent wakes up and starts to split and dance around the spine, ionizing the spinal fluid and changing its molecular structure. This action causes the opening of the midbrain and the door to the subconscious mind.

Holy spirit and Kundalini, both are action force of God Holy Spirit is said to be the action force of God, means God’s power in action. Similarly, Kundalini has also been called a life force. Just as God projects his power in form of Holy Spirit as per his plan,  and fulfills his desire with that power; in the same way, he also fulfills his auspicious desire through Kundalini.

One has to be born in a new life to achieve Holy Spirit. In the same way, one has to be transformed through yoga-practice to activate kundalini. The new birth should be related to the Christ. This means that according to yoga, the transformation should be positive, not negative. It also means that there should be a spiritual atmosphere from the beginning in one’s home. Anyway, after Kundalini-awakening, there is transformation like a rebirth. The new circuits are made in the brain.